UPDATE - Yesterday there was an Open House at Haertling's Menkick House, so I walked over to check it out. The first thing to note is that there has been a $1,000,000 price reduction! I do believe that there will be a million dollars of work needed to restore the place to its original glory. It is indeed a spectacular place with many unique features, but it needs a fair amount of work to update and to replace worn out materials. I don't think that they will get $5.5 M - worth about 3 in my opinion :-)  Realty companies have change from the original post - so here's a new link and another here. 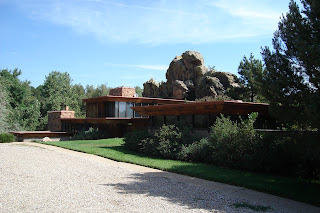 The Menkick House
Just a couple of blocks from our home in Boulder [obviously we are on the 'other side of the tracks'] is this spectacular home, nestled tight against a natural rock formation.  I snapped this picture a while back while walking along Green Rock Drive, which is a part of our route to access Boulder's Sanitas Park.  Just a few days ago, I noted the Fuller-Sotheby For Sale Sign in front, and now you have the opportunity to own one of Boulder's most famous homes - if you have several million dollars burning a hole in your pocket.

The Fuller-Sotheby link above tells us this:

Charles Haertling's Mid-century modern masterpiece, The Menkick House (1970), is attainable for the first time in nearly 30 years. More than a home, this iconic structure is a work of art and arguably Boulder's most important piece of architecture. The design of the four story home flows from the site and it's imposing backdrop of Gyp Rock (Green Rock). The home is located in Boulder's exclusive Knollwood Estates. Just a short walk along the wooded path from the end of the cul-de-sac leads to the heart of Pearl Street and all that Boulder has to offer. Stunning views of the Flatirons, Mt Sanitas, and Red Rock from the Master suite. Three additional bedroom suites cascade down the rock from the main level. Additionally features a family room, media room and art studio/office. Built in the late sixties, the home received a design citation award from the Colorado Society of the American Institute of Architects in 1971. The rock has three separate peaks of different heights, and the homes three stone masses emulate the rock. Each corresponds in size to the peak behind. According to Haertling, horizontal lines were used for the rest of the house to give prominence to the rock. The formal side of the house to the south is joined to the more casual side to the north by a long corridor and the exterior is meant to look as natural as the site using rough lumber and stone. Remodeled in the early 80's by the current owner it has been meticulously maintained since. This is truly a once in a generation opportunity to own an architectural work of art and Boulder's most famous home. 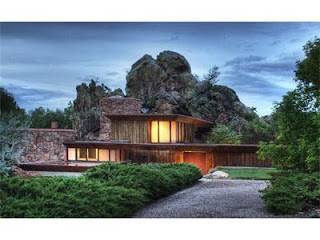 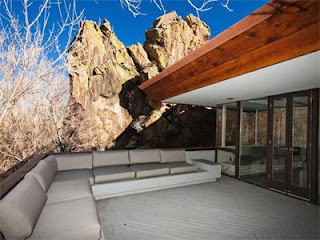 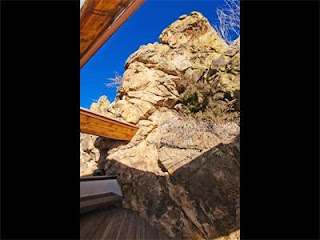 Charles Haertling is probably Boulder's most renowned architect, and details of his life and prolific career can be found here.  Also, click on the Sotheby link to get more information about the place, more pictures, details of the interior and exterior spaces, and oh, the price as well - $6,500,000.
Posted by DES at 10:38 AM

Email ThisBlogThis!Share to TwitterShare to FacebookShare to Pinterest
Labels: Boulder

We just learned from a neighbor and long-time Knollwood resident that Menkick lived for a time in our condo - apparently after his divorce and having to vacate the spectacular Menkick House.

Anonymous said...
This comment has been removed by a blog administrator.
5:14 AM

I like that description "Knollwood Estates." However, in this part of Indiana, any residential area with the name Estates in it is usually a trailer park. Lol!

Ha! Know what you mean about Estates and trailer parks :-) Our condos are Knollwood Village, a step or two down from Estates!

The realtor description did not tell us how many bedrooms, baths, and square feet. Lol! Is there a family room? A laundry room? What about closet space? Is there a one, two, or three car garage?

Good points, Biz. I would also like information on quality of schools, proximity to schools and shopping centers, grocery stores, and bus line. If I'm going to plunk down millions, I don't want to have to drive 15 miles to the nearest Kroger.

Bizzy - gotta go to the website to find that info. The realty agency just changed, so my links probably no longer work - I will check it out.

Location - close to hikes and Pearl street mall and elementary school - but gotta drive for groceries :-)

Think it is now down in the mid $4 million range - what a deal!

Started out at $5.5 M I do believe; must be nice to be able to sit on an asset like that for an extended period of time! 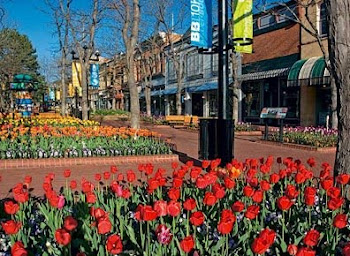